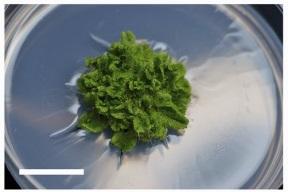 Bryophytes (liverworts, hornworts and mosses) comprise the three earliest diverging lineages of land plants (embryophytes). Marchantia polymorpha, a complex thalloid Marchantiopsida liverwort that has been developed into a model genetic system, occupies a key phylogenetic position. Therefore, M. polymorpha is useful in studies aiming to elucidate the evolution of gene regulation mechanisms in plants. In this study, we used computational, transcriptomic, small RNA and degradome analyses to characterize microRNA (miRNA)-mediated pathways of gene regulation in M. polymorpha. The data have been integrated into the open access ContigViews-miRNA platform for further reference. In addition to core components of the miRNA pathway, 129 unique miRNA sequences, 11 of which could be classified into seven miRNA families that are conserved in embryophytes (miR166a, miR390, miR529c, miR171-3p, miR408a, miR160 and miR319a), were identified. A combination of computational and degradome analyses allowed us to identify and experimentally validate 249 targets. In some cases, the target genes are orthologous to those of other embryophytes, but in other cases, the conserved miRNAs target either paralogs or members of different gene families. In addition, the newly discovered Mpo-miR11707.1 and Mpo-miR11707.2 are generated from a common precursor and target MpARGONAUTE1 (LW1759). Two other newly discovered miRNAs, Mpo-miR11687.1 and Mpo-miR11681.1, target the MADS-box transcription factors MpMADS1 and MpMADS2, respectively. Interestingly, one of the pentatricopeptide repeat (PPR) gene family members, MpPPR_66 (LW9825), the protein products of which are generally involved in various steps of RNA metabolism, has a long stem-loop transcript that can generate Mpo-miR11692.1 to autoregulate MpPPR_66 (LW9825) mRNA. This study provides a foundation for further investigations of the RNA-mediated silencing mechanism in M. polymorpha as well as of the evolution of this gene silencing pathway in embryophytes.